Launched on August 27, 1940, the USS IOWA battleship would head for Newfoundland and the North Atlantic just three years later for her first war patrol during World War II. 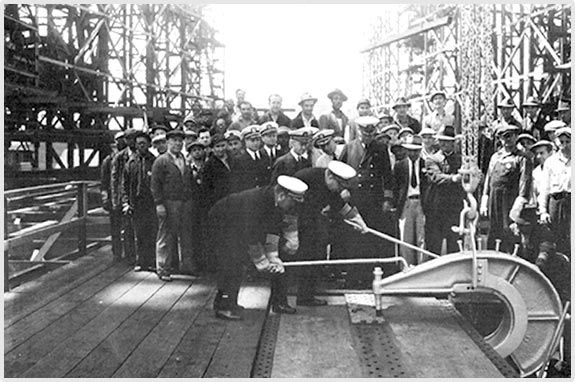 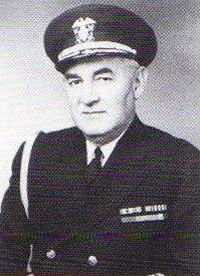 To Sea for shakedown in Chesapeake Bay and along Atlantic Coast. 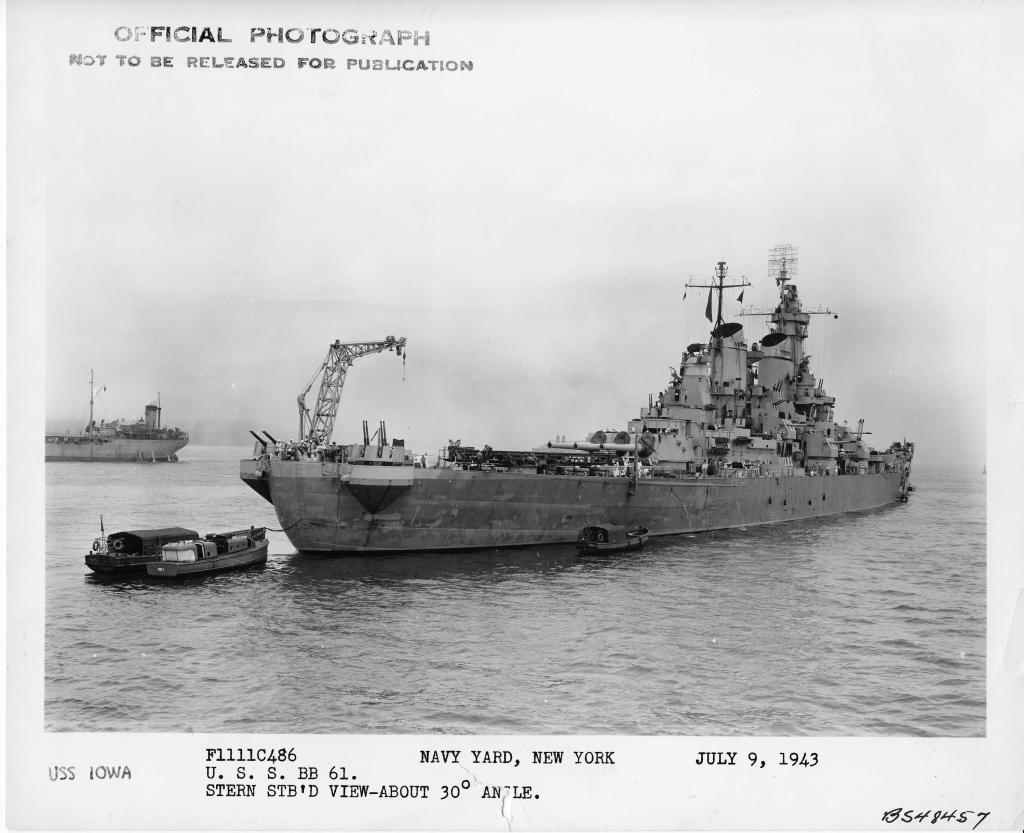 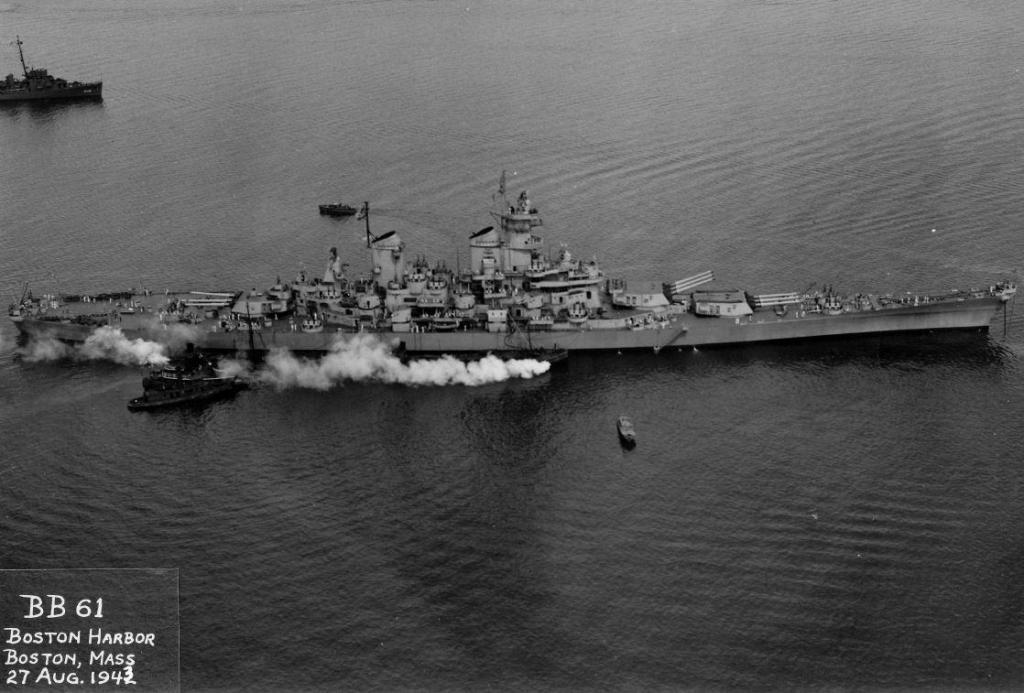 En Route to Newfoundland and the North Atlantic for her first war patrol. The assignment called the “Tirpitz Watch” (a German battleship) contributed to the neutralization of the threat presented by that warship then poised in Norwegian waters. 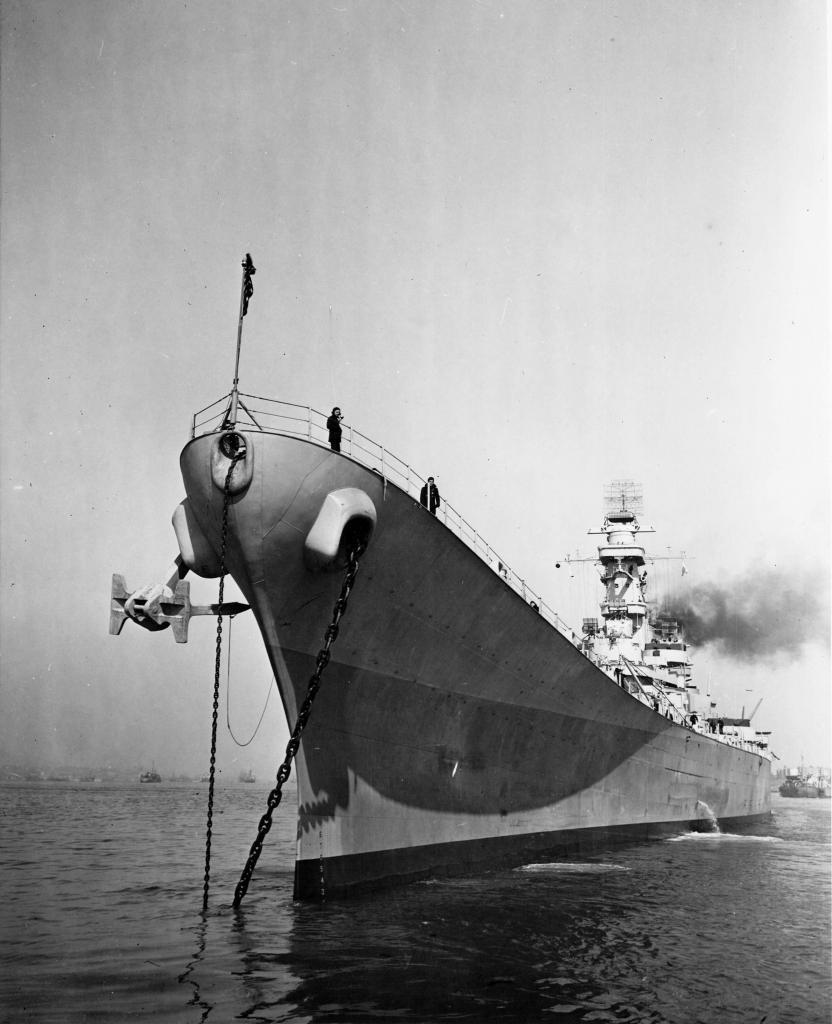 To Norfolk Navy Yard for two weeks of maintenance in preparation for taking President Roosevelt to North Africa for Tehran Conference. 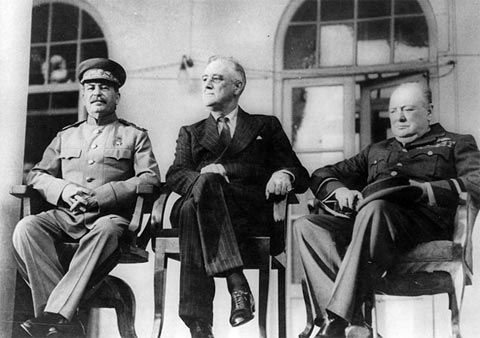 En route to Mediterranean with FDR and other high-ranking members of American delegation to Mers-el-Kebir, Algeria and then Tehran. The Tehran Conference was with Stalin and Churchill. 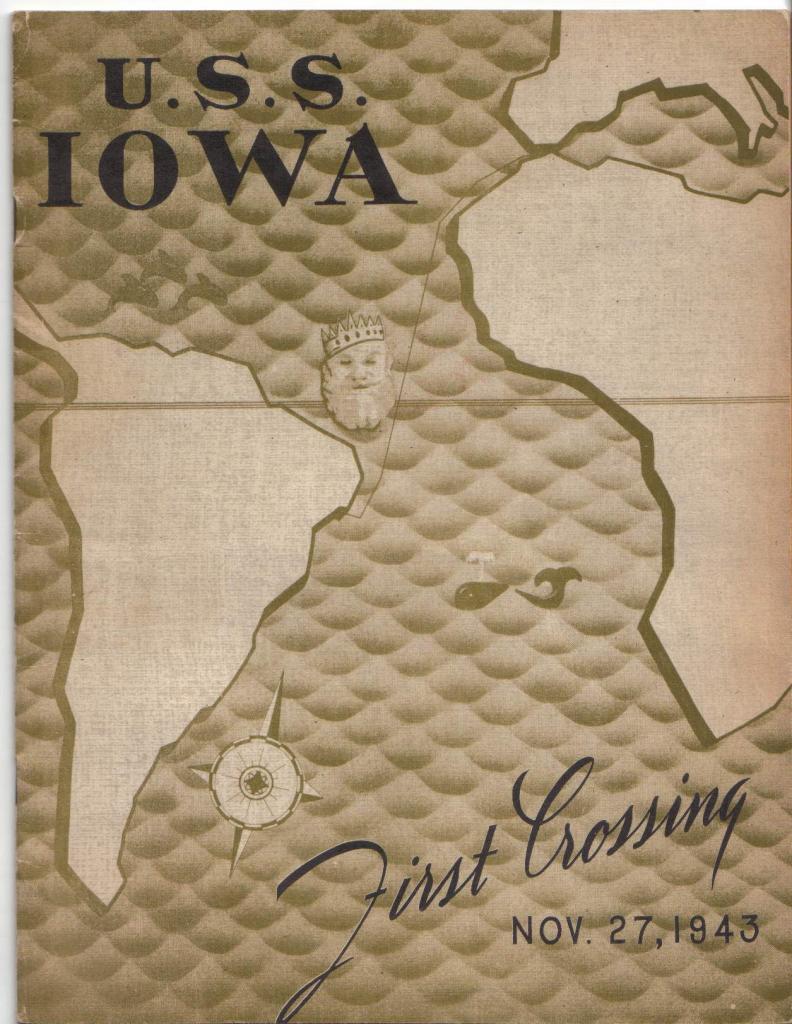 FDR Heads Back to the USA 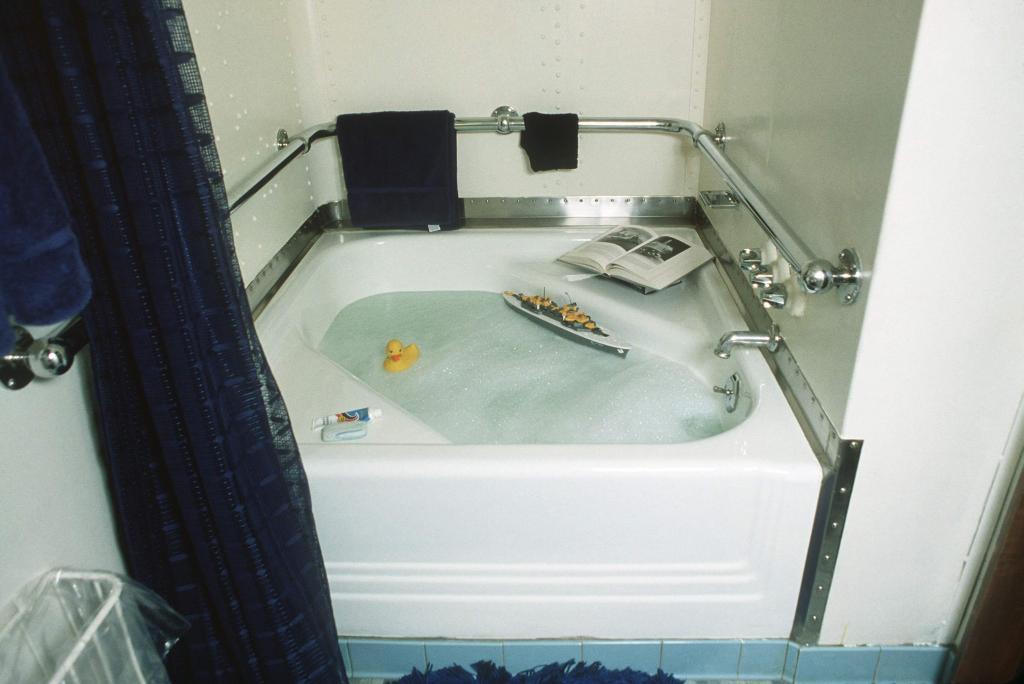 Completion of mission with return of FDR to the United States.

Perhaps the only bathtub installed for a President on an American warship, the tub was installed as a convenience for President Franklin D. Roosevelt when he crossed the Atlantic Ocean to meet with British Prime Minister Winston Churchill and Soviet Secretary General Joseph Stalin at Casablanca, Morocco on the first leg of the journey to the Tehran Conference in November 1943. After the conference she returned the President to the United States.

En Route to the Pacific

En Route to Pacific as Flagship of Battleship Division 7, in company with USS NEW JERSEY. The USS IOWA became a charter member of the famous Pacific Fleet Task Force 58. 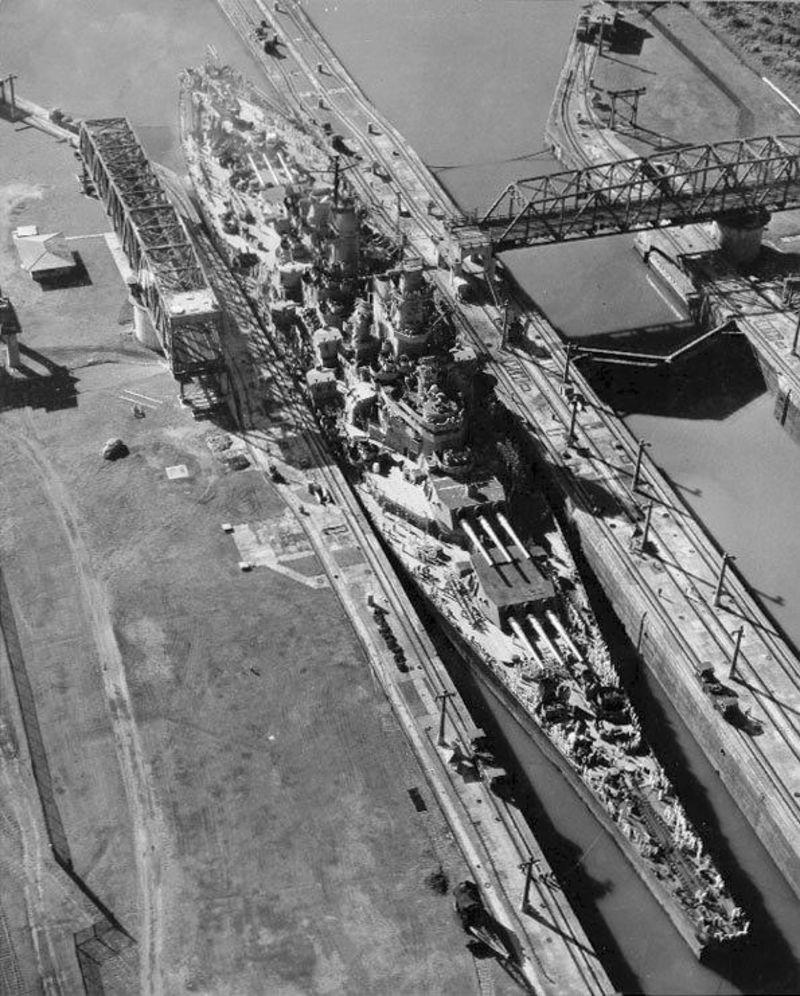 First Firing of Weapons in Combat

First firing of weapons in combat in attack on Japanese naval base at Truk in Caroline Islands. In action off Truk, the USS IOWA sank light cruiser Katori.

First shore bombardment against Mili Atoll in Marshall Islands. The USS IOWA received her first hit when she was struck by two Japanese projectiles (5 inch and 6 inch). The 6 inch projectile hit Turret 2 and the 5 inch projectile hit the hull plating, neither of which caused significant damage.

Bombardment of airfield, bombs wharf and other enemy facilities at Ponape.

Shelling of Saipan and Tinian

Shelled Saipan and Tinian and blew up an ammunition dump. 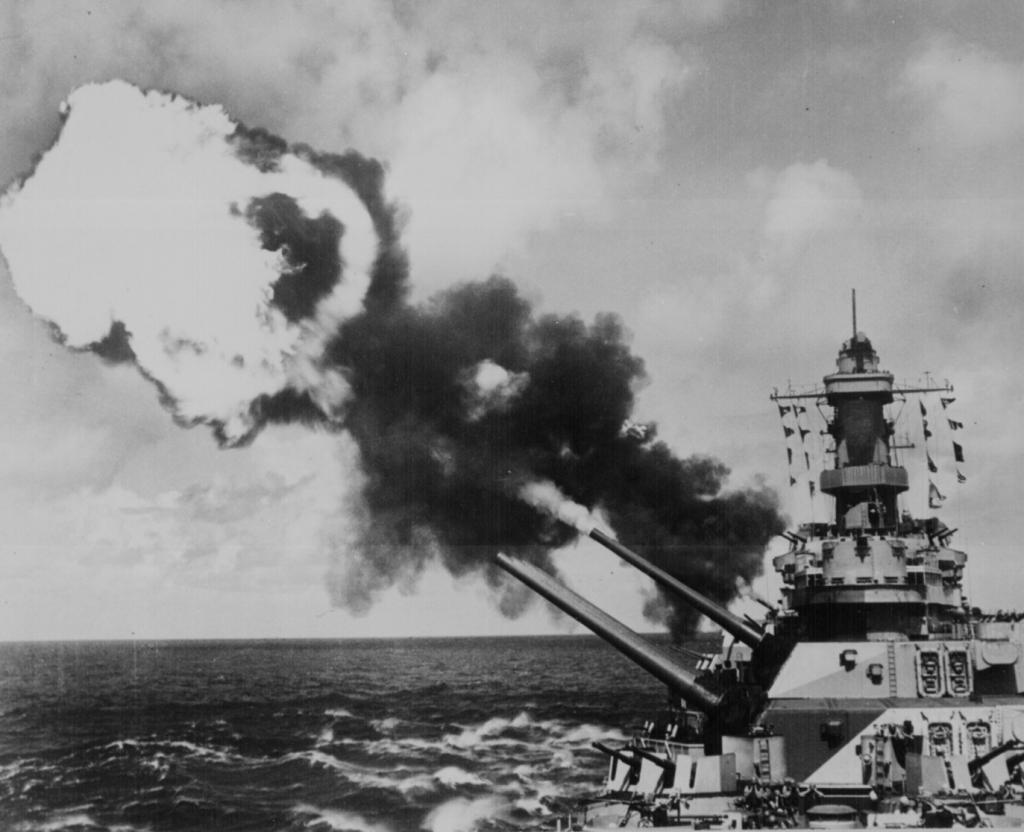 In action throughout battle of the Philippine Sea. Downed at least three attacking planes. 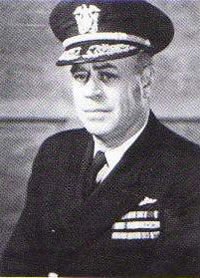 In 1941-44, Captain McCann led two submarine squadrons, served in important positions at the Navy Department and was commanding officer of the battleship Iowa (BB-61) from August – November 1944. After promotion to the rank of Rear Admiral, he was Chief of Staff to Commander, Tenth Fleet, served with the Atlantic Fleet and Commanded Task Force 68, which escorted President Harry S. Truman to and from the Potsdam Conference.

Participating in air strikes against Ryukyu Islands, Taiwan and Luzon.

Headed for Battle of Leyte Gulf. 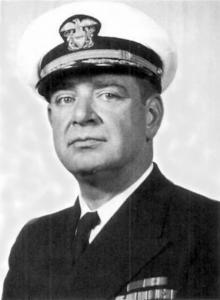 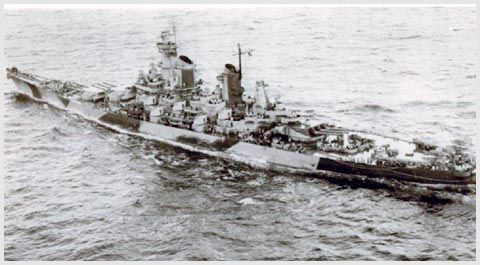 In Drydock in Ulithi 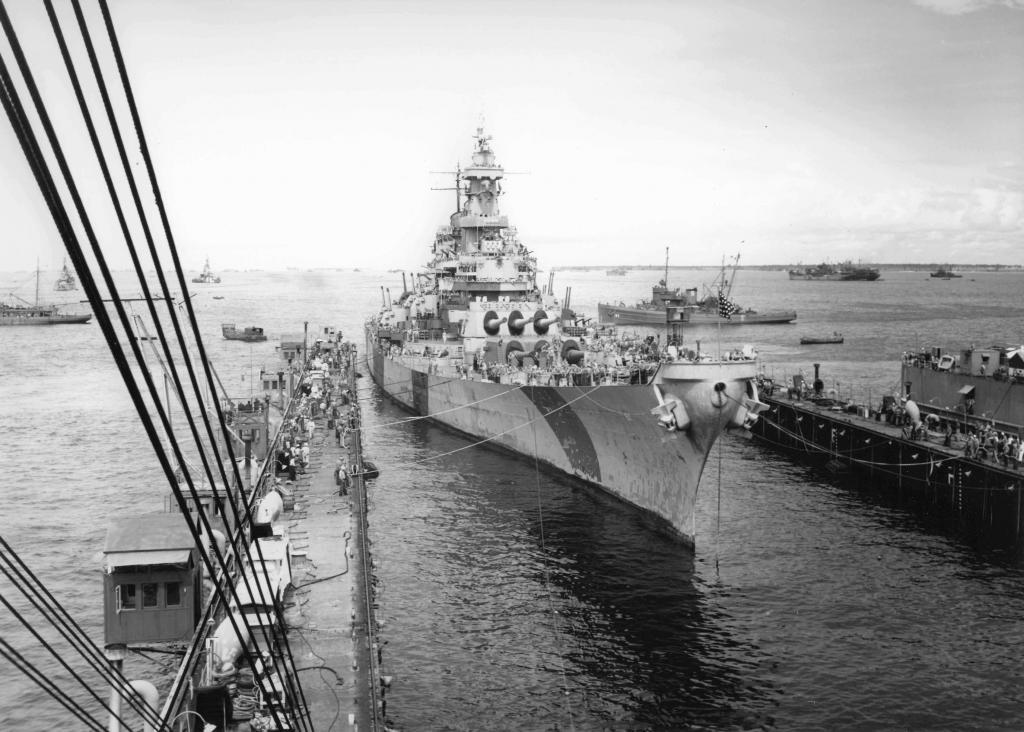 At Ulithi for replenishment and maintenance in drydock ABSD-2. Lost plane – washed over the side during typhoon.

As one crew member recounts, “It was a very scary night, the Iowa rolled to about a 45 degree angle at one point and we all held our breaths that it wouldn’t happen again. As our luck went, it happened at meal time so you can imagine the condition of the deck in the mess hall.”

There were 24 ships damaged, plus the destroyers Monoghan, Hull, and Spence which were sunk with a loss of 765 sailors. Damage to shaft caused by storm required USS IOWA to return to the United States for overhaul at Hunters Point Shipyard, San Francisco in the following month. 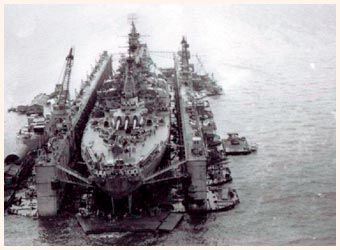 In drydock until March 19, 1945. This was the first major overhaul since leaving the East Coast. Bridge area was enclosed. New search and fire control radar installed. 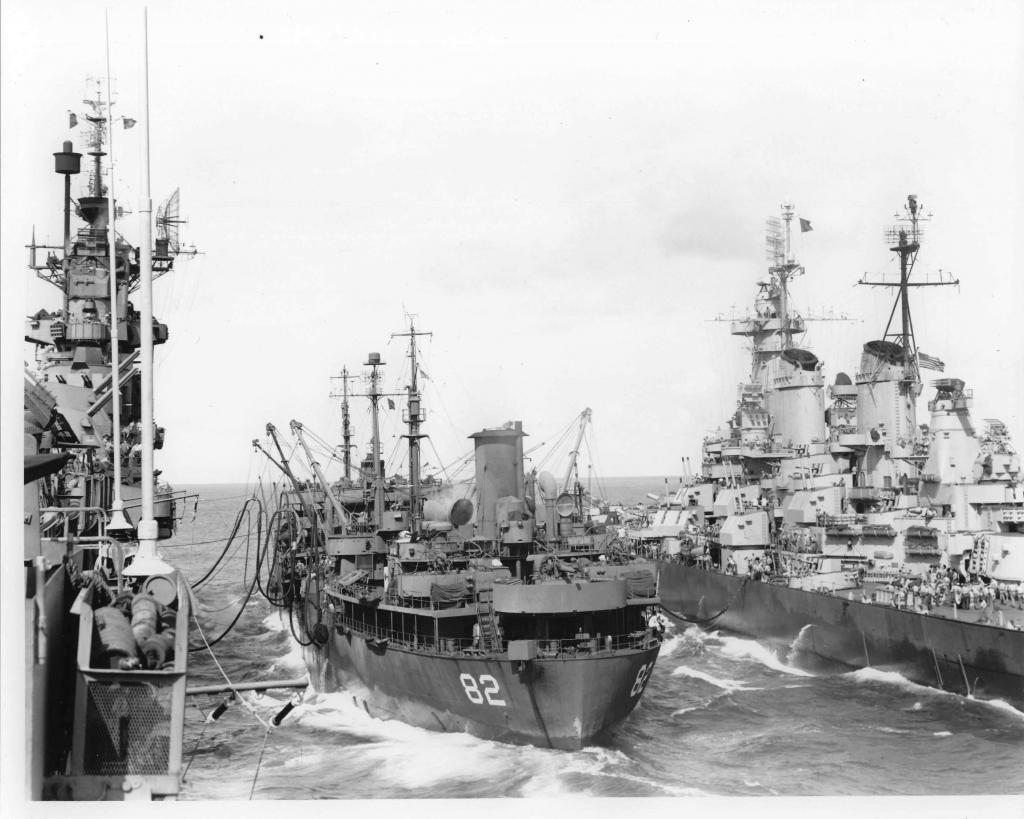 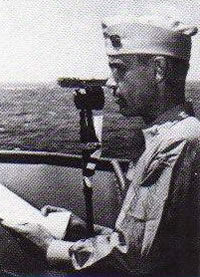 With the USS Missouri 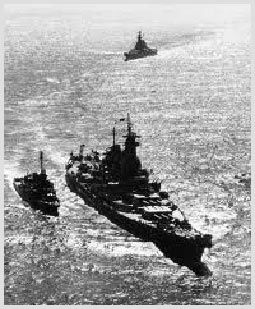 In company with USS MISSOURI, USS IOWA put into Sagami Bay to effect the surrender of Yokosuka naval district. 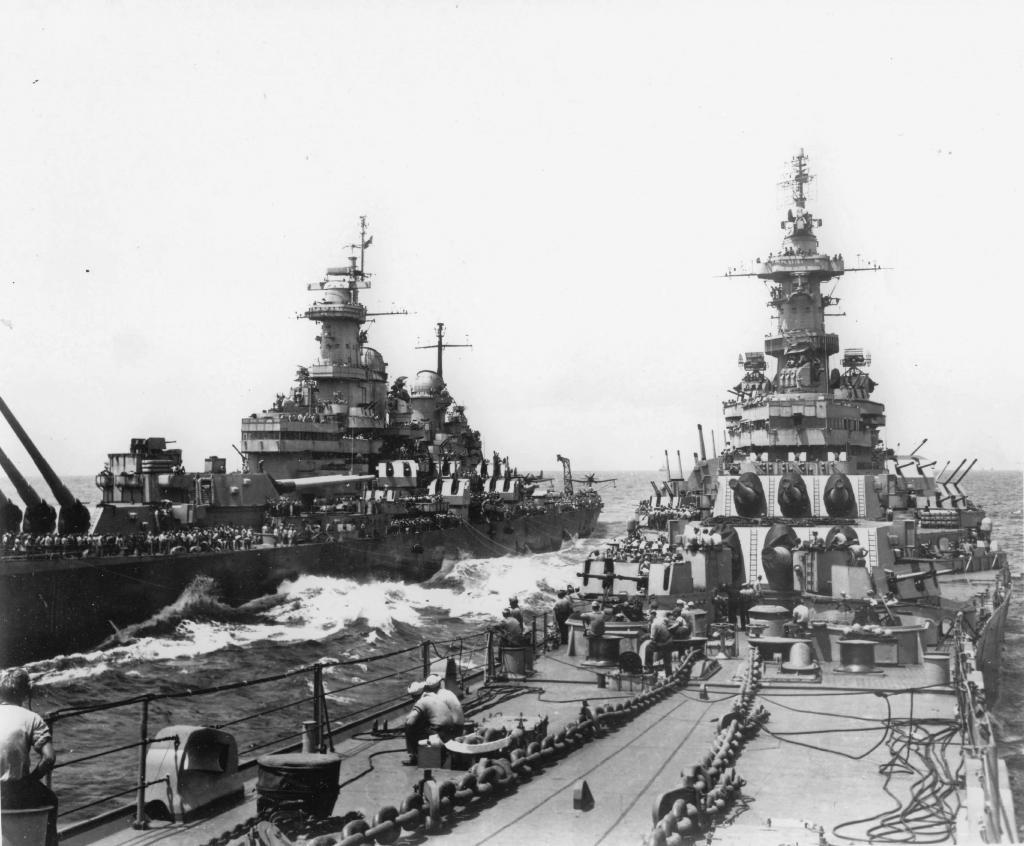 USS IOWA and USS MISSOURI entered Tokyo Bay in support of landing of occupation forces to take place next day. 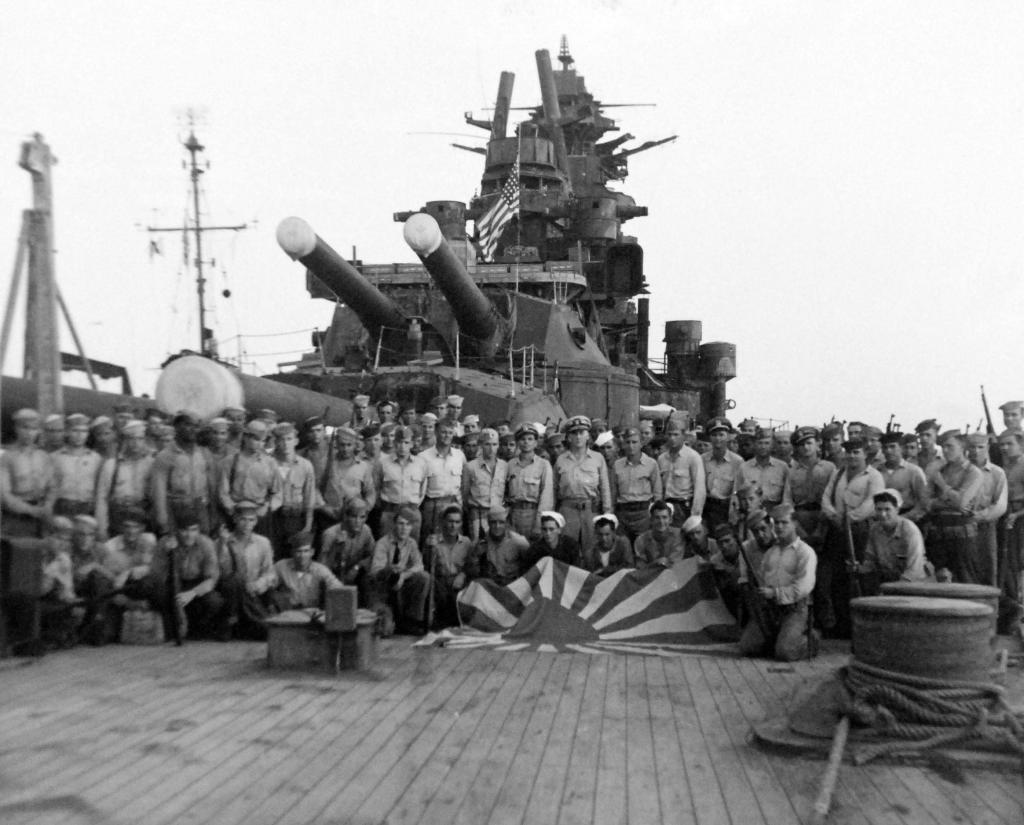 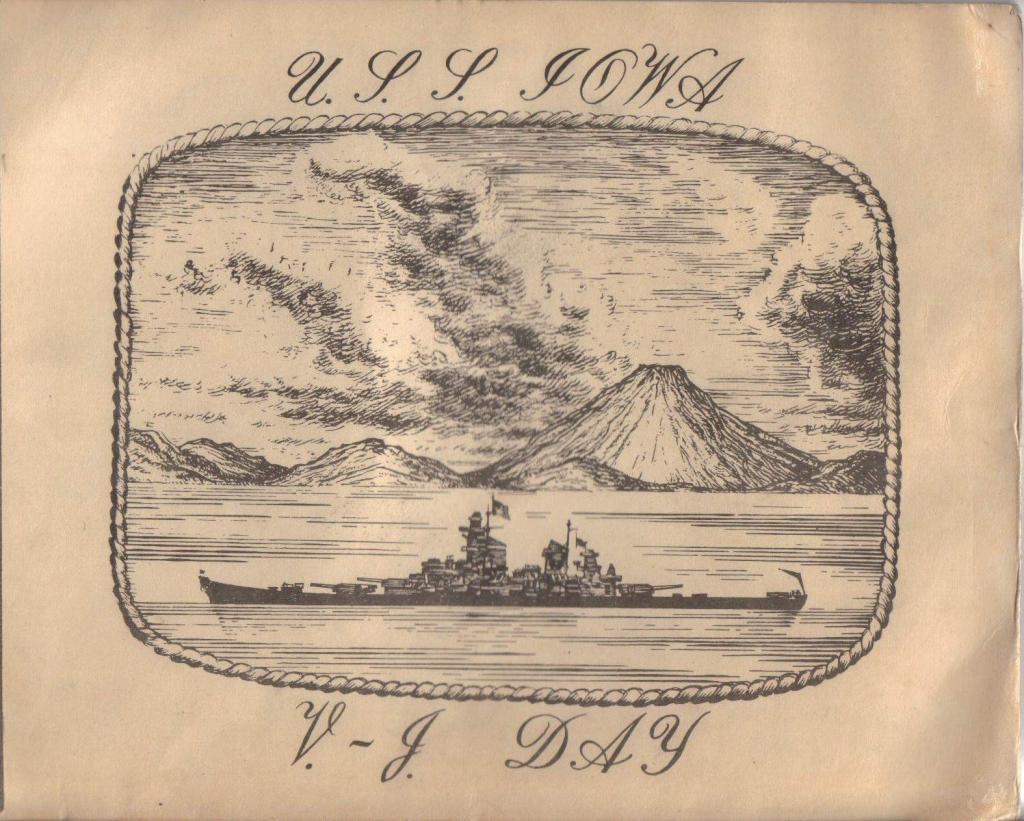 Underway for the United States 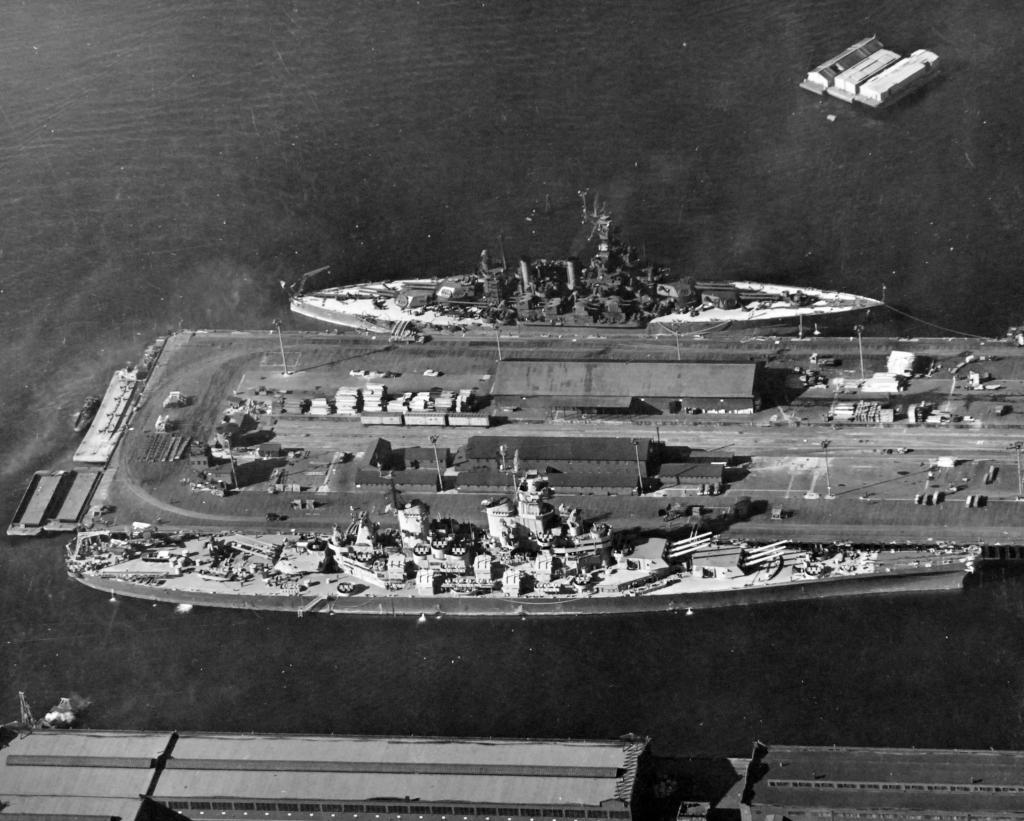 Arrived in Seattle, Washington and from there went on to Long Beach where she engaged in training operations along the West Coast.

Captain Frederick I. Entwistle USN Takes Over as Commanding Officer 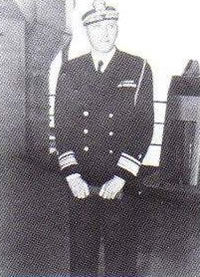 Arrived in Tokyo Bay to serve as flagship of Fifth Fleet until March. 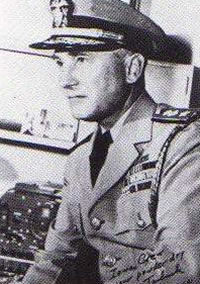 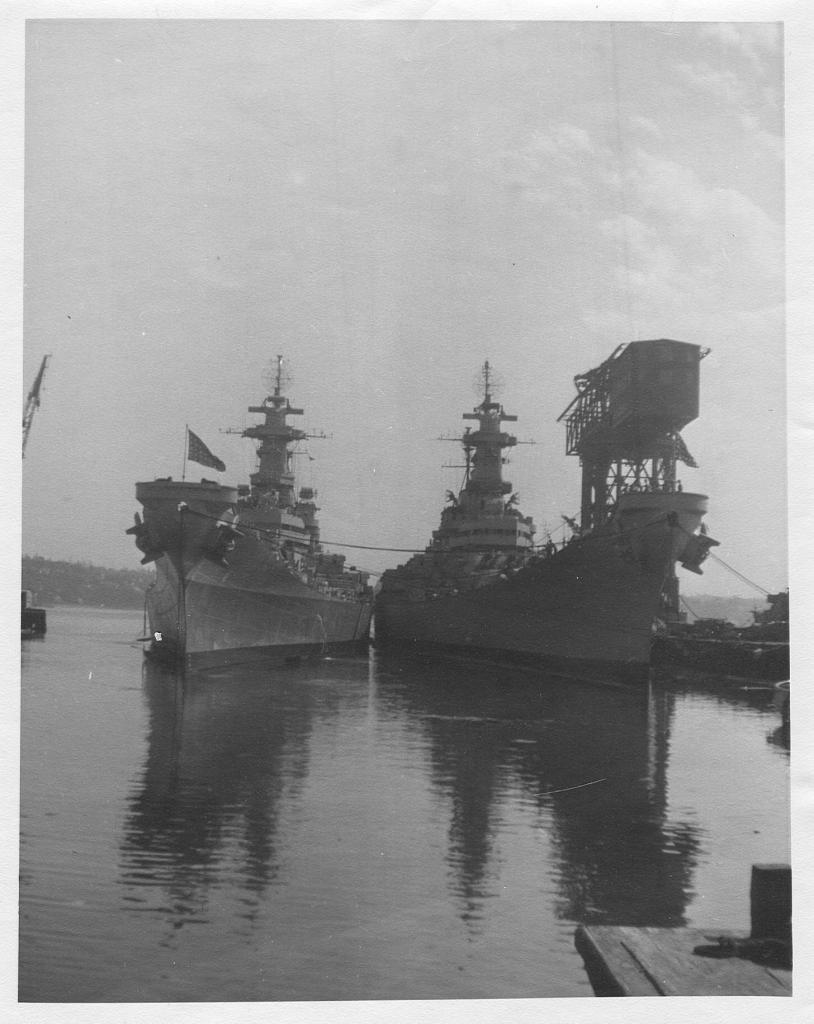 USS IOWA again overhauled. This time it was at Puget Sound Navy Yard. She received SK-2 radar and had many 20mm and 40mm mounts removed. Then was painted haze gray on all vertical surfaces. 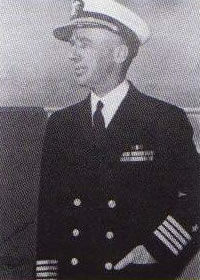 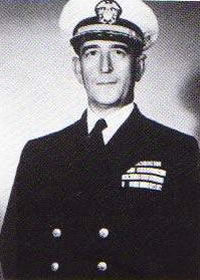 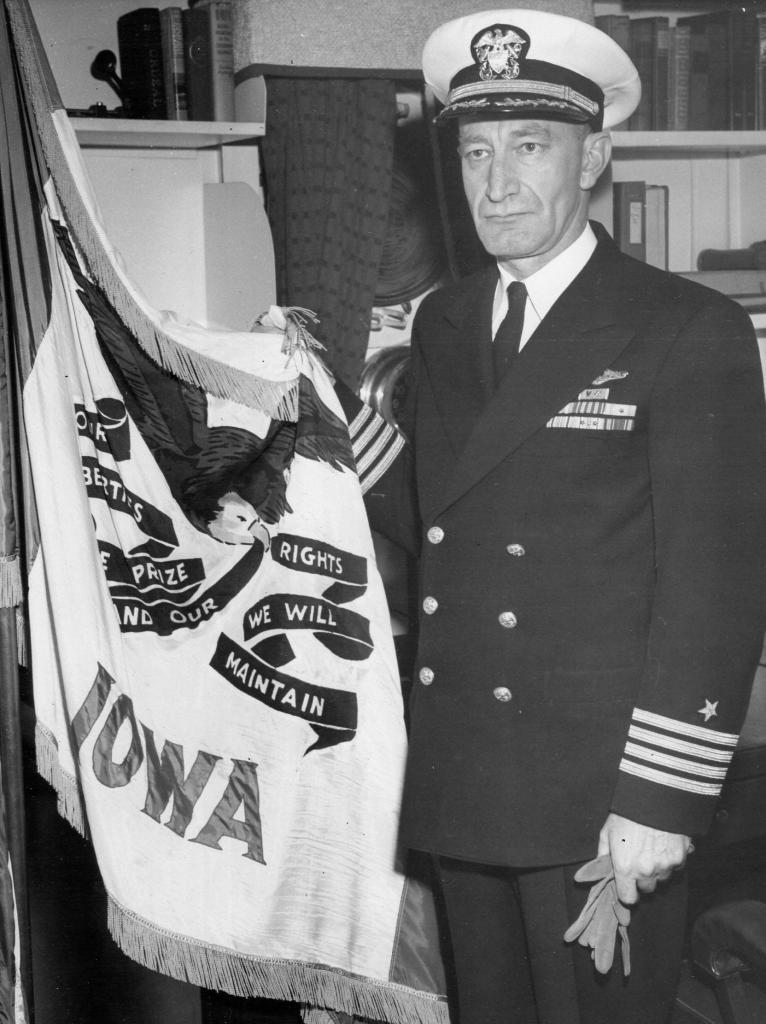