The Battleship of Presidents

The Battleship of Presidents:

Built in 1940, the USS IOWA served our country for over 50 years. Designated the “World’s Greatest Naval Ship” due to her big guns, heavy armor, fast speed, longevity and modernization, she kept pace with technology for more than 50 years.

During her more than 50 years in service, IOWA has welcomed and escorted our nation’s Commander-in-Chief on many occasions. No other battleship in our nation’s history has been host to more U.S. Presidents than the IOWA. 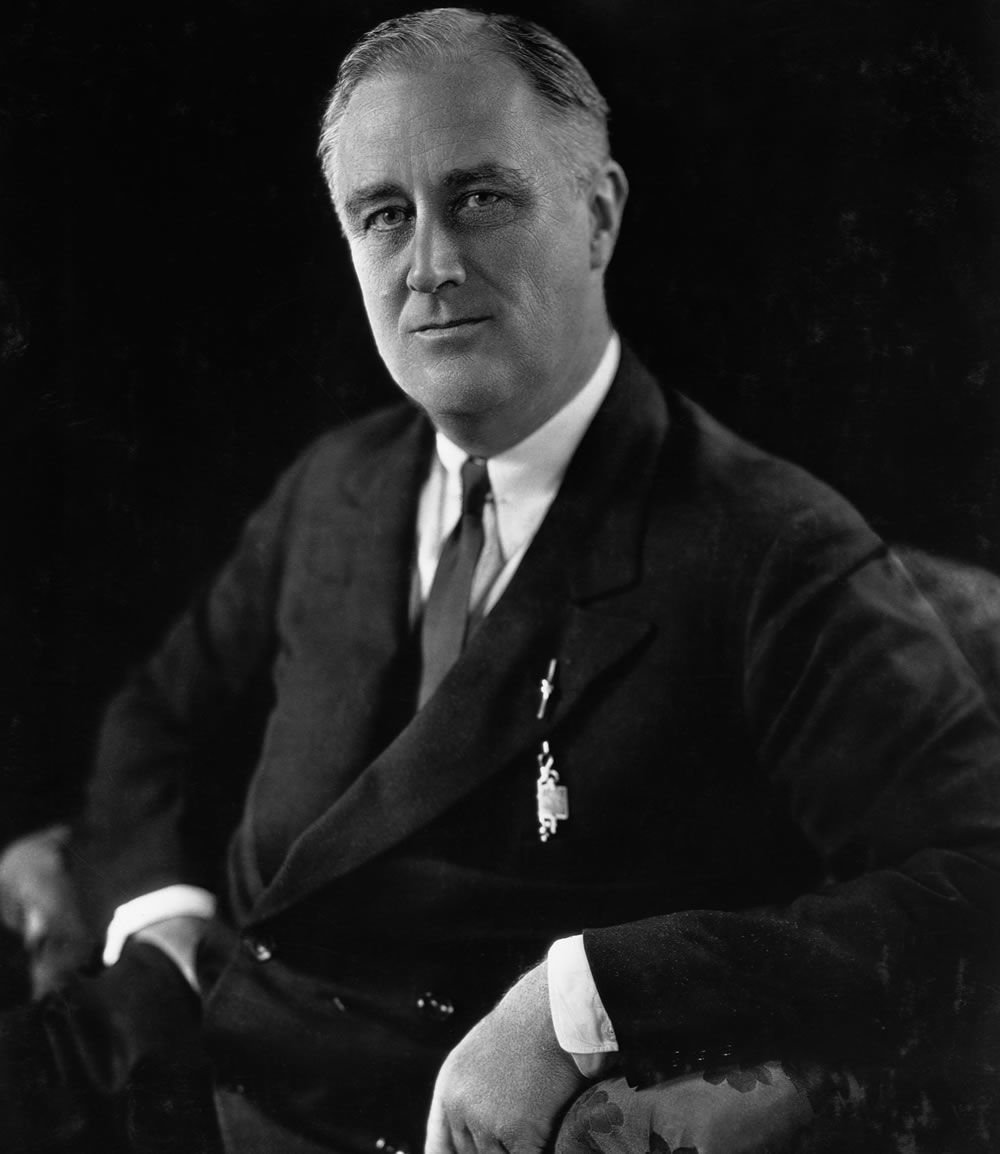 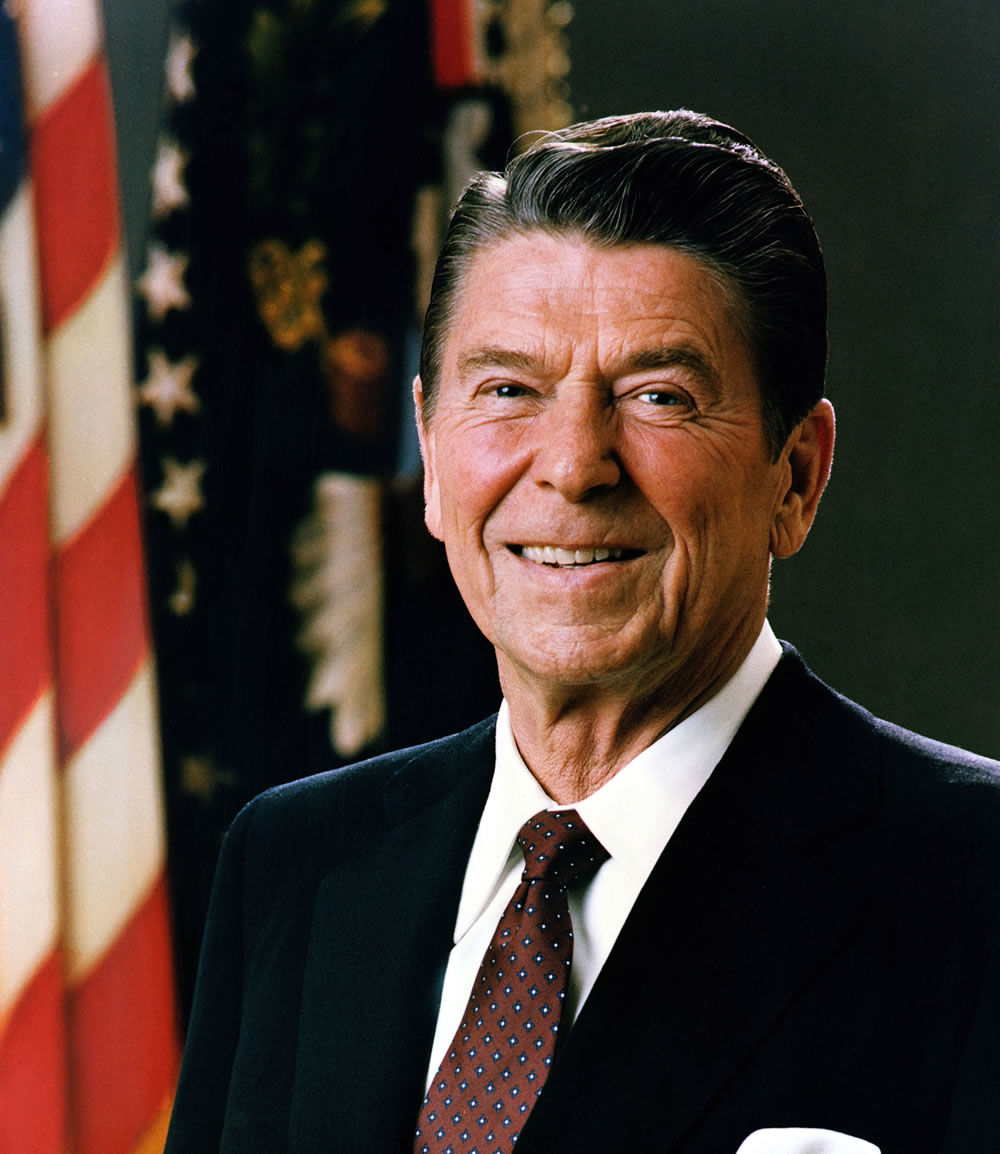 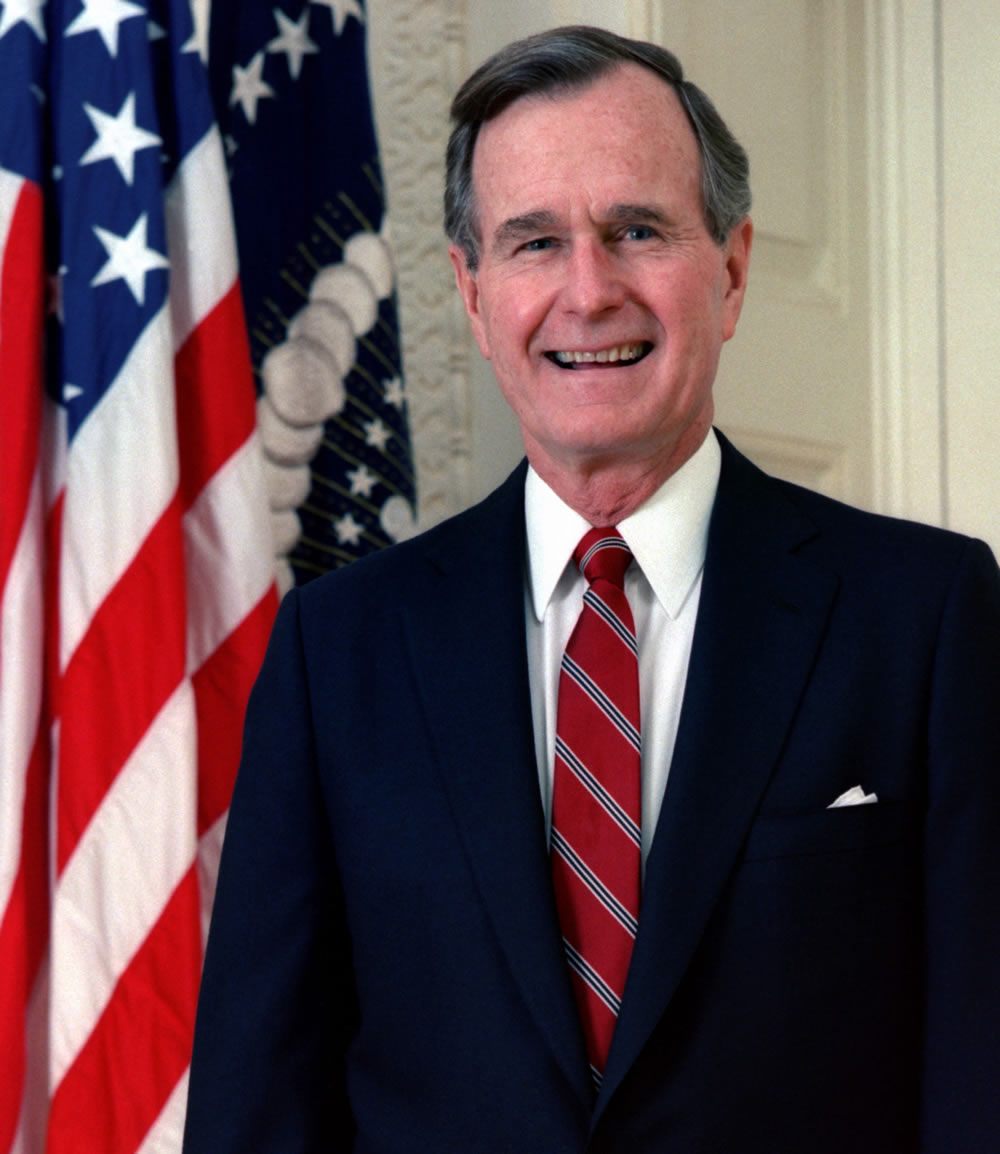 On 12 November 1943, President Franklin Delano Roosevelt boarded the USS Iowa from the Presidential yacht USS Potomac at the mouth of the Potomac River. The President’s party included Presidential Advisor Harry Hopkins and the Joint Chiefs of Staff for a secret meeting with Winston Churchill and Joseph Stalin at the Tehran Conference.

On 14 November 1943, at Roosevelt’s request, the USS Iowa conducted an anti-aircraft drill to demonstrate her defensive capabilities. Escort ships also participated in these activities, one of which was the destroyer William D. Porter. The warship was performing a torpedo drill, when #3 torpedo was accidently discharged from its tube and was headed directly towards the IOWA. After numerous attempts to signal the IOWA via blinker light, William D. Porter crew decided to break radio silence to inform the IOWA of the mishap. IOWA turned hard right to avoid the torpedo, which exploded in the wake of the battleship. During this event, Roosevelt had learned of the incoming torpedo and asked the Secret Service to move his wheelchair to the side of the battleship for a better view.
On 16 December 1943, IOWA returned President Roosevelt back to the United States. His departing address to the crew stated, “…from all I have seen and all I have heard, the IOWA is a ‘happy ship,’ and having served with the Navy for many years, I know, and you know, what that means.”

Read more about the adventurous voyage in 1943 through a great article by Patriot’s Point.

President Ronald Reagan
On 4 July 1986, President Ronald Reagan and First Lady Nancy Reagan boarded USS Iowa for Liberty Weekend, the celebration of the restoration and centenary of the Statue of Liberty in New York City. That morning numerous ships from different eras participated in the naval revue, which President Reagan viewed from USS Iowa. He saw the ships as a personification of freedom and liberty:

“Perhaps, indeed, these vessels embody our conception of liberty itself: to have before one no impediments, only open spaces; to chart one’s own course and take the adventure of life as it comes; to be free as the wind – as free as the tall ships themselves. It’s fitting, then, that this procession should take place in honor of Lady Liberty.” 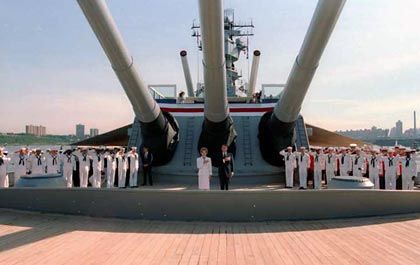 Numerous countries, ships and performers participated in this event and the evening was capped off with a 30 minute fireworks display. The Beach Boys performed that evening on top of turret 3 for the battleship’s crew, their families and several invited guests of the Navy.
President George H.W. Bush
On 28 April 1984, as Vice President, George H.W. Bush recommissioned USS Iowa at Ingall’s Shipyard in Pascagoula, MS.
On 24 April 1989, President George H.W. Bush joined the crew and families of USS Iowa at the memorial service for the battleship’s crewmembers in Norfolk, VA. He remarked:

“We join today in mourning for the 47 who perished and in thanks for the 11 who survived. They all were, in the words of a poet, the men behind the guns. They came from Hidalgo, Texas; Cleveland, Ohio; Tampa, Florida; Costa Mesa, California. They came to the Navy as strangers, served the Navy as shipmates and friends, and left the Navy as brothers in eternity. In the finest Navy tradition, they served proudly on a great battleship, U.S.S. Iowa. 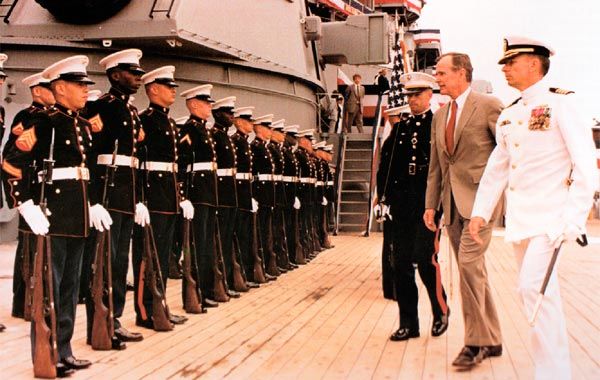 This dreadnought, built long before these sailors were born, braved the wartime waters of the Atlantic to take President Roosevelt to meet Winston Churchill at Casablanca and anchored in Tokyo Harbor on the day that World War II ended. The Iowa earned 11 battle stars in two wars. October of ’44, off the coast of the Philippines — I can still remember it — for those of us serving in carriers and Halsey’s Third Fleet, having Iowa nearby really built our confidence. And I was proud to be a part of the recommissioning ceremony in 1984. And now fate has written a sorrowful chapter in this history of this great ship.
Let me say to the crew of Iowa: I understand your great grief. I promise you today we will find out why, the circumstances of the tragedy. But in a larger sense, there will never be answers to the questions that haunt us. We will not – cannot, as long as we live – know why God has called them home. But one thing we can be sure — this world is a more peaceful place because of the U.S.S. Iowa. The Iowa was recommissioned and her crew trained to preserve the peace. So, never forget that your friends died for the cause of peace and freedom.
To the Navy community, remember that you have the admiration of America for sharing the burden of grief as a family, especially the Navy wives, who suffer most the hardships of separation. You’ve always been strong for the sake of love. You must be heroically strong now, but you will find that love endures. It endures in the lingering memory of time together, in the embrace of a friend, in the bright, questioning eyes of a child.
And as for the children of the lost, throughout your lives you must never forget, your father was America’s pride. Your mothers and grandmothers, aunts and uncles are entrusted with the memory of this day. In the years to come, they must pass along to you the legacy of the men behind the guns. And to all who mourn a son, a brother, a husband, a father, a friend, I can only offer you the gratitude of a nation — for your loved one served his country with distinction and honor. I hope that the sympathy and appreciation of all the American people provide some comfort. The true comfort comes from prayer and faith.

And your men are under a different command now, one that knows no rank, only love, knows no danger, only peace.  May God bless them all.”