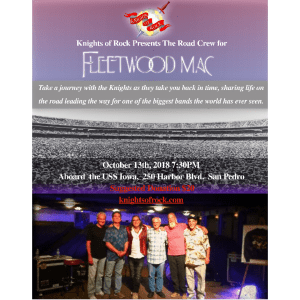 Special Presentation: During the 1970s and 80s, Fleetwood Mac was arguably one of the biggest touring and recording acts in rock-and-roll. Listen to the tales of their former tour manager, Leo Rossi, a San Pedro local, with his music touring co-workers and friends talk about the behind the scenes action of working alongside one of the biggest bands in music history. Fleetwood Mac is the definitive story of the classic rock told by the guys that were there. The show is free.  There is a suggested donation of $20 going to the 20k Watts charity that assists less fortunate children around the world. “The Battleship IOWA is happy to support our community and nonprofit partners through our Community Giving Program.