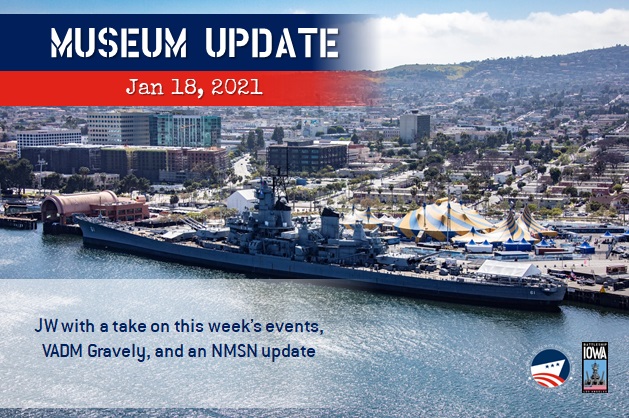 This week features two important days that are representative of what it means to be American: Martin Luther King Jr. Day and the Inauguration of our 46th president. Our role at the IOWA and National Museum of the Surface Navy is a calling… a calling to tell the important stories of those that have served to protect our freedoms as American citizens. As we go into this week, we must remember where we have come from and how far we have yet to go.

A couple of years back I had the opportunity to visit The National Museum of Civil Rights during travels to Memphis, TN. These travels were related to LA Fleet Week, but we didn’t miss the opportunity to see this important memorial and monument to the civil rights movement. The National Museum of Civil Rights has done a wonderful job telling the important story of civil rights and preserving the historic Lorraine Hotel. 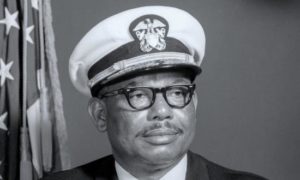 Samuel L. Gravely was a career Surface Navy officer who broke through numerous barriers to be a man of many firsts and retire as a Vice Admiral. During the Korean War he served aboard the USS Iowa as radio officer and went on to have a distinguished career ending as head of the Defense Communications Agency. This year marks the 50th anniversary of Gravely becoming the first African American to attain the rank of Rear Admiral in the U.S. Navy. You can read more about VADM Samuel L. Gravely and his service to our nation here. As a nation, we have an obligation to honor the service of individuals like VADM Gravely and continue to progress in our efforts to ensure all Americans are treated equally and afforded the same opportunities.

On the 20th, we will inaugurate a President to lead our nation during a time of crisis. Regardless of what side you were on during this past election, we are all Americans. I am saddened by the efforts to intimidate and cause violence including the recent storming of the Capitol building. This behavior doesn’t contribute to a better future as a nation, but I fear may further insulate our elected officials from those they serve. We can do better as Americans and we must strive to be our best for future generations.

Pursuing the dream to build a museum that tells the stories of the oldest and largest community of the U.S. Navy would not be possible without your tremendous support. The IOWA helped fight fascism and communism during its active service life and now it is fighting the effects of the COVID-19 pandemic. The simple fact that we are still in existence is a testament to your support and the perseverance of her crew. You played an important role in 2020 and we still need your help in 2021 to reach the finish line.

As I have mentioned in prior emails, Los Angeles continues to be shut down. We are able to open with a limited outdoor experience following the protocols for open air galleries, botanical gardens and other outdoor exhibition spaces. The revenue generated from this limited opening is approximately 12% of our average tour revenue generated during normal times. Frankly, during the week it is barely enough to cover one security guard or one tour guide. Thankfully our volunteer crew has come out in force to support the ship.

Why do we continue to operate even though these numbers are dismal? We feel that it is important to continue to remain open as an outdoor recreation opportunity, especially since the ship is a symbol of American freedom and resolve during a crisis. I can’t tell you the number of times that I have repeated in my head the phrases “Don’t give up the ship” and “Damn the torpedoes, full speed ahead!” as motivation to continue pressing forward.

We still need your help and support in 2021! We ask that you join us to not only continue to weather this pandemic, but help us ensure that we are prepared to thrive when it is over. Please consider a donation of any amount and possibly make it recurring on a monthly basis. I realize that we have a divergence of interest sometimes, so you still have the ability to designate whether you want to donate to the Battleship IOWA or the National Museum of the Surface Navy.  Please keep in mind that these efforts will begin to merge, as again the Battleship IOWA is artifact #1 of the National Museum of the Surface Navy.

You can donate to Battleship IOWA or the National Museum of the Surface Navy.

Thank you for your continued support and my blessings for an amazing and safe week for you and your family.